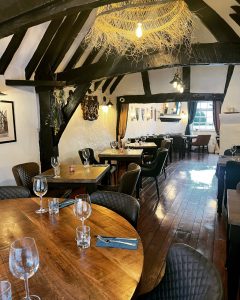 The Bluebell is the last remaining part of the now vanished 12th Century Lorimers Row, serving the traveller since 1494, when the first license to serve ale was granted. This is the oldest ‘domestic structure’, and the only surviving example of a genuine medieval inn, in Chester.

The name The Bell, as it was first named, was derived from the Curfew Bell, which was situated next door in the Bell Yard. It was then named The Bluebell to distinguish it from other establishments.

The Bluebell is host to a resident ghost, Henrietta. During the English Civil War the Bluebell was used by Loyalist forces and their families as lodgings, and the cellars to stockpile grain and other provisions, keeping them safe from bombardment. So it was on September 12th 1645 that a cavalier rode off to fight in the battle of Rowton Moor, but not before bidding farewell to his wife, or maybe lover, Henrietta, with a promise to return by 10pm that night. From the upstairs window she would have watched him and others mobilise for battle, and from this window, she would almost certainly have watched events unfold. The Royalists were soundly beaten in the field, and when it became clear that he had been killed, she rushed from the window to the cellar and took her own life.

It is said that Henrietta’s ghost still climbs the cellar steps to this day and walks through the upstairs restaurant to the window where in life she awaited his return. I have met one person who claims to have seen the ghost and many others that have spoken of strange sightings and eerie sounds late at night. Personally I would love to meet her… after all she owes nearly 400 years worth of rent!

Whilst part of the building probably dates from the 11th Century, the braced ‘King Post’ roof indicates a construction date for the present structure of somewhere between 1250 and 1400. The King Post is visible to the front of the upper level. I initially thought it was an upside-down pedestal table!

The ‘cabin’ extension to the front was erected as a barber shop in 1684 and remained as such until the 1920s. In the 18th Century the cabin also served as a stage coach ticket office. A small window high on the building was utilised to sell tickets to the passengers sitting on top of the coach. I wondered where McDonalds got their drive-thru concept from!

From c1700 the Bluebell Inn has become a house, a shop, and an Inn once again, and in more recent years has housed various restaurants and retailers. The building has survived at least three serious threats to its very existence. Plans for road-widening called for the Bluebell to be demolished. Local residents rallied around and the scheme was luckily cancelled. We hope it will be here for many years to come, to delight and enchant its many visitors.

Enjoy the charm of dining in a medieval Grade 1 listed building first licensed in 1494.

The Bluebell on Social Media

We use cookies on our website to give you the most relevant experience by remembering your preferences and repeat visits. By clicking “Accept”, you consent to the use of all our cookies.
Cookie settingsACCEPT
Manage consent

This website uses cookies to improve your experience while you navigate through the website. Out of these, the cookies that are categorized as necessary are stored on your browser as they are essential for the working of basic functionalities of the website. We also use third-party cookies that help us analyze and understand how you use this website. These cookies will be stored in your browser only with your consent. You also have the option to opt-out of these cookies. But opting out of some of these cookies may affect your browsing experience.
Necessary Always Enabled
Necessary cookies are absolutely essential for the website to function properly. These cookies ensure basic functionalities and security features of the website, anonymously.
Functional
Functional cookies help to perform certain functionalities like sharing the content of the website on social media platforms, collect feedbacks, and other third-party features.
Performance
Performance cookies are used to understand and analyze the key performance indexes of the website which helps in delivering a better user experience for the visitors.
Analytics
Analytical cookies are used to understand how visitors interact with the website. These cookies help provide information on metrics the number of visitors, bounce rate, traffic source, etc.
Advertisement
Advertisement cookies are used to provide visitors with relevant ads and marketing campaigns. These cookies track visitors across websites and collect information to provide customized ads.
Others
Other uncategorized cookies are those that are being analyzed and have not been classified into a category as yet.
SAVE & ACCEPT
X